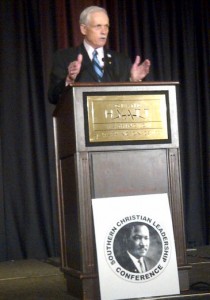 Thank you for having me here… My name is Jim Martin, Chairman and Founder of the 60 Plus Association based in Alexandria, Virginia representing over 7 million seniors.

It’s an honor and privilege to join with the Southern Christian Leadership Conference, led by Dr. Charles Steele, on this historic occasion. In my 50 plus years working in the nation’s capital, I’ve made hundreds of speeches, many of them off the cuff remarks.  But because of the solemnity and importance of being part of this celebration, I felt duty bound to write, and in fact, re-write many times, my remarks in order to do proper justice to Dr. King.  Again, I have written and re-written what you are about to hear, simply because Martin Luther King was, and still is, such a dynamic force.

After the Marine Corps, I earned my journalism degree at the University of Florida and in 1963 I covered two of the most important events of that year, the March on Washington for Jobs and Freedom, and three months later, the tragic assassination of our 35th President, John Fitzgerald Kennedy. Yes, I was at the March, fully aware that our country was making history in a most profound and important way.

Not through legislation, not thanks to politicians.  No, it was the determined leadership of a group of men: A. Philip Randolph, Roy Wilkins, Dr. King—I could go on (and a group of women)…Rosa Parks, Dorothy Height, Mahalia Jackson, Marian Anderson, Marian Wright Edelman, and yes, I could go on and on…history in the making by a handful, including so many in this room tonight.  They brought out the best in our country.

Dr. King’s words, from the moment he uttered them, were destined to be heard by every generation of Americans yet to come, and with the eyes of the nation on him, he lifted our character to a higher level, and forever changed the world. This was a proud moment to be an American. Every stripe of American was there to bear witness. Champions for equal rights, victims of discrimination, celebrities, politicians, rich, poor, from every walk of life, of every race, of every creed.

And …every political stripe, as well.  Born in Kentucky and raised in Florida, I’m proud of my family’s political background. Lincoln Republicans, if you will, with my home state of Kentucky divided between north and south.

So I’m sensitive to the Republican part of my heritage. It was a Republican President – Dwight Eisenhower—who in 1957 sent troops into segregated Little Rock, Arkansas, and it was a Republican Senator—Everett McKinley Dirksen—from Illinois, the Land of Lincoln, whom President Lyndon Johnson called on to help him round up the votes needed to pass Civil Rights legislation because the former democratic Senator from Texas could not convince his democratic Senate colleagues to vote the right way.

As a father and grandfather, I want my family to live in a nation that’s strong and proud, a nation that benefits from a unified spirit that elevates every man, woman and child. Abraham Lincoln, paraphrasing the book of Matthew said, “a house divided against itself cannot stand.”

This is the dream, and this is the warning — as a unified people who stand up for one another we hold in our very hands a limitless possibility for our nation. Let us today remember Dr. King’s words and embrace his vision. Now as the head of a senior citizens’ organization, we like to think that we grow wiser as we grow older (and I think that’s a pretty fair statement to make), but I marvel that Martin Luther King was but 34 years old when he made his “I Have a Dream” speech now acknowledged by many as the most important speech of the 20th Century. Sadly of course, at age 39, his life was brought to an abrupt end by his tragic assassination.