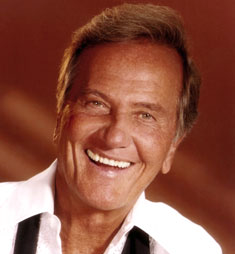 Right now, Boone – the #10 all time top recording artist, according to music industry bible, Billboard – is the Lion in Winter, five decades of recording history behind him and a busy future ahead. A very active lion…

Boone runs his own record company, The Gold Label, designed for legendary artists of a certain age and certifiable talent (all with million-selling gold records to their credit) “It’s a senior tour for singers,” he jokes. “But there is a qualification: they have to be able to sell records.”

So far Glen Campbell, Jack Jones, Roger Williams, Patti Page, Cleo Laine, Sha Na Na and others (as well as Boone himself) have lived up to the Founder’s Maxim. More than 30 Gold Record albums have been released to date.

He is national spokesman for the 60 Plus Association.

They hear him on two nationally syndicated radio shows, “The Music of Your Life” and “The Pat Boone Show”, which features contemporary gospel. His personally written columns appear weekly on WorldNetDaily.com and NewsMax.com, fearlessly embracing politics, religion, and timely causes that catch his attention.

In recent months, the topics have ranged from separation of church and state, illegal immigration, abortion, the death penalty, to public education, the NEA and the ACLU.

He and his wife Shirley were so concerned about the Cambodian food crises in the 1970s, they initiated, what is now, a two hundred million dollar a year humanitarian organization called Mercy Corps.

It was not only the music but Boone’s appearance on the American Music Awards. In black leather and fake tattoos, he was promoting his new album, “In A Metal Mood,” heavy metal songs given a Pat Boone treatment.

Millions saw the joke (“It was a parody of myself”, says Boone) but not the “gospel arena” who dropped him as host of that TV show until they listened to the music and finally saw what he was doing, that it was perfectly fine, and reinstated him.

Boone’s original teen idol success, not to mention his classic boy-next-door good looks, attracted Hollywood’s interest, leading to Boone starring in 14 movies, all of which were major features, not rock ‘n roll quickies.

They showcased Boone with such stars as Ann Margaret, James Mason, Debby Reynolds and Tony Curtis and were box office hits.

He was, in fact, Elvis’ main competition at this time, mid-fifties onwards.

Television beckons: Boone became the youngest person to have his own weekly musical variety show (ABC), at times the number one show in television, and was an in-demand guest star for other shows, both musical and dramatic.

Advertisers discovered that Pat Boone’s personality sold things. He became an accomplished TV pitchman, especially for the Chevrolet company for many years.

You may not know but Elvis Presley once opened in concert for Boone. “I had to follow him,” recollects Boone. “Thank God I had a couple of hit records then and I was the star that night. I never followed Elvis again!”

Pat Boone has another statistic, not usually found in the world of rock ‘n roll. He and wife Shirley have been married 55 years (four daughters, 15 grandkids) and have lived in the same Beverly Hills house for 40 years.

People agree and disagree with Pat Boone – about rock ‘n roll, politics, religion, the usual stuff. Boone knows he can’t be all things to all people, But most people agree on one thing… Pat Boone has lived his life, engineered his career, utilized his talent and celebrity with integrity.

Click here to watch Art of Living feature of Pat.