James L. Martin joined the Marine Corps in 1953 at age 17 as the Korean “conflict” concluded and served on active duty until 1958. In 1955, his Battalion Commander awarded Jim a meritorious citation for “exemplary conduct and leadership qualities exhibited in the performance of duties.” 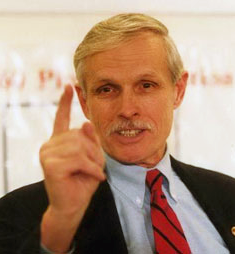 In 1956, Sergeant Jim Martin began a two-year tour of duty as an elite Marine Security Guard at the American Embassy in Jakarta, Indonesia. Jim entered the University of Florida in 1959 and graduated with a Bachelor of Science in Journalism in 1962, where he received the William Randolph Hearst reporting award for creative writing.

Jim came to Washington in 1962 where he covered Congress and the White House for two years during the Kennedy-Johnson administration as a newspaper reporter and radio/TV broadcaster for 3 dozen media outlets in the South. Jim served for six years as Chief of Staff to Congressman, then Senator, the late Edward J. Gurney (R-FL), 1964-69.

He has helped to organize and direct several advocacy groups including the National Conservative Political Action Committee (NCPAC) and the Public Service Research Council (PSRC) (Americans Against Union Control of Government), which opposes public sector compulsory unionism as a threat to elected representation.

Now Mr. Martin serves as the Chairman of the 60 Plus Association, which has been called an “increasingly influential lobbying group for the elderly–often viewed as the conservative alternative to the American Association of Retired Persons.”

60 Plus is a hard-hitting organization dedicated to protecting the tax rights of seniors, and to repealing the most confiscatory of all taxes–the inheritance or estate (death) tax.

Jim Martin has been quoted as saying that while there are two certainties in life, taxes and death, now, thanks to the death tax, Jim adds a third certainty–taxes after death.

60 Plus presents a Benjamin Franklin Award to Members of Congress in both parties who sponsor legislation to abolish the third certainty, taxes after death. Original sponsors are Rep. Chris Cox (R-CA) and Sen. Jon Kyl (R-AZ).

60 Plus, founded in 1992, has grown to over 7.2 million citizen lobbyists nationally. 60 Plus is the only conservative senior citizens group to publish a Congressional Rating System, and routinely presents the nonpartisan Guardian of Seniors’ Rights award to federal and state elected officials, Republicans and Democrats — but focuses those awards generally to members of the U.S. Congress.

Mr. Martin has also been a vocal critic of taxpayer subsidized political advocacy groups. In 1995, he testified four times before Congress on this volatile issue where he spotlighted the fact that more than 40 seniors’ organizations receive hundreds of millions of tax dollars and, as Jim puts it, “politick openly and blatantly with said dollars.”

Jim correctly pointed out that this was “just the tip of the iceberg” and subsequent Congressional investigations substantiated the charge that there is at least a $39 billion dirty little secret’ in Washington, to wit your “tax dollars at work in all sorts of illegal ways and for political activities for which you may not be in agreement.”